Our next Portrait of a 30-something is my friend and former roommate, Amy Adams. Amy is a world traveler as well as a travel blogger. She recently got back from an epic trip around the world where she went to Israel, New Zealand, Hawaii, Oslo, Turkey, Barcelona, and Athens all in the span of two months. She did it all for less than $4500 for TWO MONTHS away in over 7 countries including flights, lodging, food, and any tourist activities and souvenirs, so she’s a great person to talk to about going on an amazing trip without breaking the bank. Amy writes about her world trip and all of her travels on her blog, This Borderless World.

Amy formerly worked as a concierge in a hotel. She was also a flight attendant. She’s had travel in her blood for quite a long time. But this summer, Amy has been the queen of staycations. She’s walked almost every New York bridge from the Queensboro to the Brooklyn to the George Washington this summer, and she’s also constantly inspiring me by going out and exploring a new area of the city, or a new museum, or even a new cemetery! She just never stops!

Read more below about a 30-something who proves that life never has to be boring and that there’s always more to explore! 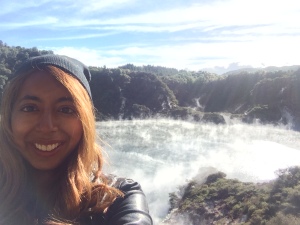 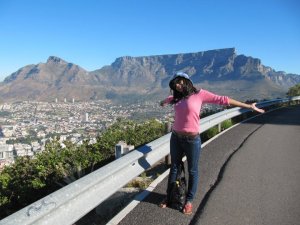 What’s the accomplishment you’re most proud of in your 30s so far?

When I was 19, I came to the US with no plan, minimal possessions, very little money and the most excited, motivated, positive and enthusiastic attitude imaginable! The possibilities were endless and I was tremendously excited about being in the country of my dreams.
In hindsight, I love that free spirited, fearless, independent girl who did what she wanted, listened to her own inner voice and was never discouraged. After almost ten years of living in the comfort and security that a traditional life offers,  I’m doing a complete 360 and wanting to revert back to that solo traveling, wanderlusting free thinker! I like her better than the make-up wearing, brand name clad, conventional girl I became. My 30’s reiterated in the clearest way possible that life is fleeting… so live your truest life. I’ve wholly embraced this new (or rather old) concept and I’m very excited about where this takes me.

What do you NOT miss about your 20s?

My 20’s were exhilarating and thinking back on it now is exhausting but worth it! Circumstances lead me as far north as Vermont, and then to the Deep South for a few years. Then I lived up and down the eastern seaboard until finally landing in my dream city! I wish I had arrived sooner but I wouldn’t trade my experiences for anything in the world!

Looking back, what shouldn’t you haven’t been afraid of in your 20s?

I’ve never had a nuanced existence- people either loved me or hated me. For the longest time I tried to reach this middle ground… which can only be described as “normal.” But I realized very quickly that I don’t do normal. Thinking about getting insurance or wondering when I should do my laundry or feeling the need to rush home and watch tv (instead of experiencing life) makes me sad. I was a risk taker in my 20’s and I miss that fearless, rebellious, and independent spirit! Everyone keeps saying you need a plan and you need a goal but I’m opting to live in the moment! No goals, no plans, no expectations, no limitations!

My 30’s have been incredibly edifying. I’ve been waiting for a while now to get excited about wanting adult things like a home, family, car, and a two week vacation. But I’ve come to realize that is not the life I want or the one I was meant to live. I’m one year in and I’m more optimistic and invigorated than I’ve been in years. I’m embracing my identity as a nomad. I feel younger, more energetic, humbler and psyched for a future unknown!

What do you find most challenging about this decade?

At first I abhorred social media and believed it eliminated the possibility of establishing any type of relationship organically. Now I’ve come to realize it’s in fact enhanced the chances of meeting more people and making meaningful connections. It’s all a matter of perspective. Social media can be used for good or evil… which is empowering.

What are you most looking forward to? Be it tonight, next month or ten years from now!

Living in the moment- every moment! And never ever letting other people’s ideas of a proper and perfect life affect my idea of my perfect existence. I also know there are like minded folks out there with similar unconventional attitudes and I’m excited to meet them!

What would you like to hear more about regarding the thirties? What articles would you like to read?
I’d love to read about unique 30-something year olds who follow their own paths no matter what. I want to see people who listen to their hearts and drown out all the naysayers! I’m especially interested in those who “didn’t succeed” (according to societal standards) but are still on their own true path! I regard the persevering types as the most successful, interesting and inspiring. The most influential people on this planet died poor without a ton of support. They really are the wealthiest of all for they’ve truly taken ownership of their lives. That type of wealth can never be squandered!

Every year around the holidays, I wonder why I’m not “feeling it” the way I used to. Even though I’m now thirty, I find myself doing the same thing I did during the holidays as a teenager, and all throughout my twenties- trying to pull up an old feeling. You know that feeling. It’s that “magical holiday feeling”…remember it?

It’s an old memory now. Maybe I used to have it when I looked at the sky and was positive Santa was about to come. I guess I was awaiting something special…feeling that anticipatory glow. It came from expecting presents to appear out of nowhere…that wonderful moment of waking up and knowing something special has arrived…the feeling of barely being able to wait a moment longer. Now the closest feeling I have to that is when I open my email inbox after a long time of not checking it.

No, that’s sad. There are definitely times when I eagerly await something better than email.

But during the holidays, I guess I don’t know how to get that anticipatory excitement back the same way it used to be. So I performed my holiday traditions as usual- I got out my holiday stuff. 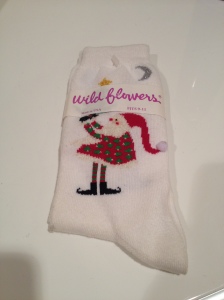 My holiday owl tea mug. Yes, this is holiday related.

I lit my holiday candles and filled my room with pine smell. I made pumpkin everything. I played my Indie Holiday tunes Pandora station.

And I felt happy. I love all my little holiday traditions.

But I still didn’t get that old feeling back that I wanted so badly. So I sulked, vaguely disappointed. Every year I’ve sulked, feeling my special holiday feeling was just a hairs breadth out of reach.

And then I remembered something actors say to me all the time when I direct them in plays. They say, “Laura, I’m just not feeling it.”

And you know what I say back? I say “It doesn’t matter if you’re not feeling it! You’re not always going to feel it! Do the scene anyway! Just go with it!” I usually say this in a nice way, of course.

So with that in mind, I took a walk in Woodside at night during the first holiday season of my thirties. 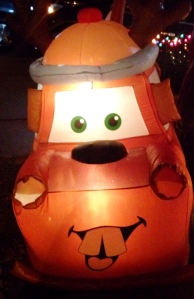 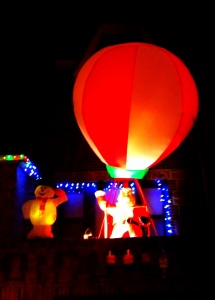 And I looked. And looked again.

And I felt something mild, and silly, and light. A subtle feeling. Older in a different way. Something like peace. Possibly hope.

The old feeling was gone. It had been gone for a long time.

And that was okay.

If I looked closely it had been replaced.

Happy holidays to all of you. Let in anything you’re feeling right now. It’s okay.