When you turned 30, did you or people you know make reference to “dirty thirty”? Maybe you hosted or attended a ‘dirty thirty’ birthday party, or maybe someone just said “Ooooh, the dirty thirty” when you told them you were turning 30. I always wondered the origin of the expression. Is it a time when people let loose and go wild? I assumed it involved drinking and questionable behavior. Kind of like bachelorette party style fun.

I never bothered to look it up – until yesterday, when I saw that a comedy film titled “Dirty Thirty” was green lit (the film industry term for a film getting made), and that it would star YouTube celebrities Grace Helbig, Mamrie Hart, and Hannah Hart. I was immediately intrigued and decided it was finally time I researched this expression.

So, I did a little googling and found out that the origin of the expression is far more upsetting than I suspected. 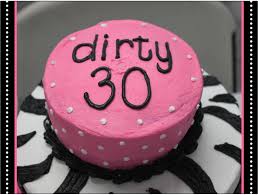 The top definition on Urban Dictionary is:

The age at which single women without children realise that their biological clock is ticking, As a consequence they may lower their standards and increase their willingness to perform sexual acts as a matter of desperation in order to find a mate/sexual partner. They may also attempt to hook up with younger males as an attempt to elongate their youth.

AAH! That is not what I thought it would be at all. Yuck. I hate it.

I’ve decided that I will officially ban myself from using that expression. Granted, that’s only the Urban Dictionary definition, but still. I don’t like it one bit.

Thankfully, the film “Dirty Thirty” doesn’t sound like it’s anything about women lowering their standards, so that’s good.