One of the best decisions I’ve made in my 30s so far has been deciding to go graduate school. A little under two years ago, I moved to Los Angeles to pursue screenwriting and television writing at UCLA. The decision to go to graduate school was more significant to me than simply getting a degree. It was  the moment at which I committed myself to being a writer and accepted the life of a working writer.

This Friday, I’ll graduate from the UCLA MFA Screenwriting program. But the more exciting night of the week was last night – our Screenwriters Showcase. We celebrated the student screenwriters achievements over the past year, honored winners of a industry judged competit 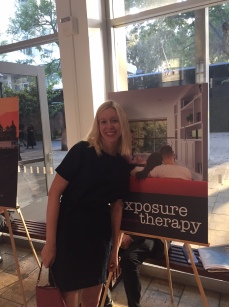 ion and listened to a guest speaker. This year we were lucky enough to have Graham Moore, Academy Award writer of The Imitation Game (who is only 32, by the way!).

One thought that was echoed throughout last night’s speeches was the advice to focus on process rather than the prize. For us, as writers, that means throwing ourselves into the actual work of writing and to not focus on the money, awards, and recognition. But I think it’s applicable to almost any pursuit in life. You need to truly enjoy and gain value from the “work” of whatever it is your striving for, and not just become fixated on the end goal.

Here’s a picture from tonight’s festivities! As one of the winners, a poster was created for my film. And here’s me alongside the poster for Exposure Therapy.

Now, I’m not quite sure what’s next for me. It’s probably the first time in my life that I have an unplanned chunk of time ahead of me. Of course I’ll be writing, but I’ll also need to find some way to make money as I write. I’ll keep you posted on my journey!

When I enrolled at UCLA in Fall 2013 at thirty-two years old, I wasn’t sure how old the majority of my peers would be. Would I be the ‘older one’ or a ‘younger one’? Turns out, I’m on the older side, as most of my classmates are in their 20s. But I’ve been assured that classes prior to mine (class of 2015) had an older median age.

I’ve had friends tell me, “I’m too old to go to graduate school now,” thinking their ship has sailed. But it’s not true – you’re never too old for graduate school. And, according to information collected from the 2000 National Postsecondary Student Aid Survey, the average graduate student is 33 years old. Not only that, but 20% of all graduate students are over the age of 40.

You may worry about the perceived ‘stigma’ of being an older graduate student. But in my mind, yes, you may stand out if you’re an older student but standing out is good. Really. People are curious about you and your background, and many times you’re perceived as being courageous for continuing to go after your goals. One of the most talented recent graduates in my program was a grandmother in her 60s, and she was awesome. She won tons of awards for her writing and one of her TV pilots was actually produced.

When you go to graduate school later in life, you have a better idea of where you’re aiming to go. You don’t get stuck in “academic inertia” as one college professors said when he warned me against applying to school too soon. You also appreciate the sweetness of graduate school life a lot more than would if you were only a few years out of college (That is, if you’re not simultaneously working a full-time job, which is a beast.)

Also, you can benefit form the Lifetime Learning Tax Credit, which in 2014-2015 was about $2,000 per year. However, there are income restrictions and only one member of married couple can benefit from this credit at a time. You can read more about it here.

Education, at any age, is never a waste.

I can’t help but feel old these days, even though I know the feeling is environmental. It’s because I’m nearing 33 years old (wow!) and I spend much of my days surrounded by undergrads. I’m a graduate student in writing at UCLA, and I am constantly surrounded by eighteen to twenty two year-olds. There are 29,663 undergrads at UCLA, so you can imagine how packed the campus is.

Unlike a lot of grad students, I’m on campus everyday because I have a part-time job at the college library. So I happen to be in the undergrad scene every day. It feels funny to be standing on line at Jamba Juice getting a smoothie with half of the undergrad gymnastics team or getting solicited to join the various campus groups (Acapella, anyone?). Like I’m perpetually stuck in this very specific time period of life. The experience has been disorienting, to say the least. It doesn’t help that I also spent four years post-college working at an arts college in Manhattan called SVA (The School of Visual Arts). I was 25 when I started my job there, so I felt like a “recent grad” myself. Working at SVA was fun and exciting, and made the transition to the real world somewhat smoother. But, it seems like the background of my life narrative these past years seems to be the world of academia…

While I wouldn’t want to be surrounded by only thirty-somethings, I do feel like I miss the diversity of various age groups – from younger to older folks. But, with grad school, you take the good with the bad. I love my program, and I’m at least surrounded by this absolutely magnificent campus.

Look familiar? UCLA’s campus is used in tons of movies and TV shows, most recently Royce Hall (lowest photo) was featured on The Mindy Project.

Have you been to graduate school? How did it feel for you?