Currently, the minimum age requirement to be president of the United States is 35 years old.

In Ireland, there was a referendum recently to reduce the minimum age of presidency from 35 to 21.

Ireland voted no on the referendum by a majority of 891,704 votes.

But it’s interesting who voted yes. Here’s a quote from the Irish Times:

“Dublin South Central TD (TD is the equivalent of a congress member in Ireland), Eric Byrne revealed he had changed his mind at last minute and voted Yes. “It just dawned on me, I don’t have to vote for a 21-year-old but why deprive them of the right to run?”

Fine Gael Minister of State Simon Harris, who is advocated a Yes vote, said the Constitution is ageist and needs to be changed.

“Ageism has no place in our Constitution,” he added. “It was written at a time when there was a different view of our younger citizens.” “

21 is pretty young, but I wonder if the referendum results would be different if the age difference was changed from 35 to 30 instead of from 35 to 21.

Do you think there’s a major difference between the ages of 30 and 35? What would it be like if the presidential minimum age in the US was lowered from 35 to 30?

Our youngest president ever was Theodore Roosevelt, who was sworn into office at 42 years of age 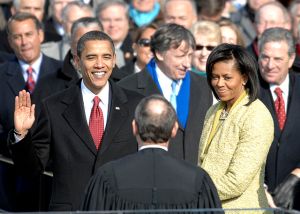 Barack Obama is our 5th youngest president, sworn in at 47 years of age