I’m gonna go on a rant about something that seems silly. But it actually may hold the answers to many of life’s important questions. Here goes.

For over 2 years I’ve been obsessed with washing my dishes using this sponge on a stick device. Not that I like washing dishes- in fact, I don’t like washing them, which is why I like this device. You can fill the sponge stick with dish washing detergent (which is refillable), and the sponge is a yellow and green brillo pad that attaches to the end. When the sponge/brillo pad part gets grubby, you just throw it away and attach a new sponge.I’m not a fan of holding sponges because I don’t really like the smelliness of them getting on my hands (I swear, I’m not a germaphobe…but dirty sponges smell gross!). This solved the hand-smelling problem. It was great. 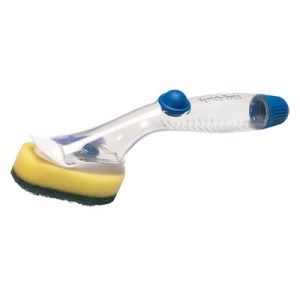 Except for one thing.

Because of the shape of the sponge, it was difficult to clean the inside corners of cups. The sponge just couldn’t get in there. It was so annoying because every time I washed a cup, it proved inadequate. Every cup. Every time. For years.

So I ended up having to clean cups twice- once with the sponge, and once with an annoying little brush that could get at the corners. I washed cups this way forever.

Then the other day I was at Target with my brother, and he picked up a sponge/brillo pad refill that I had never seen before. It had an angle to it. 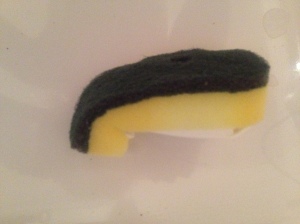 I watched in awe as my annoying little problem was solved in seconds. The answer had been out there all along. It was always close by. It had been around for years. I just never knew about it!

I bought the new sponge/brillopad refill and that was that. Problem solved.

Could there be hidden solutions to a bunch more dumb little annoyances ? It seems likely.

How about you? Have you ever solved a silly problem in seconds after it bugged you for years? 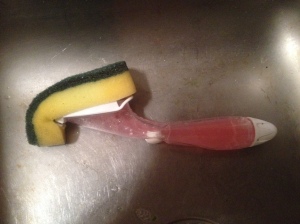