My good friend and coworker, Natasha, is checking on the status of her new dresses as I type. But these aren’t just any pretty  dresses- they are Lolita. And, at 32 years old, Natasha rocks out Lolita fashion.

This is Natasha as a Lolita.

Playing dress up isn’t just for kids. It never has been. But I never understood just how much dressing up is for adults too… until now.

Natasha is in her thirties and works tradeshows and autoshows with me. She’s always been great with makeup. She puts on false eyelashes perfectly before work in barely a minute- I’ve watched her in awe. She’s an amazing make-up artist- brilliant with shadows and all sorts of contouring. 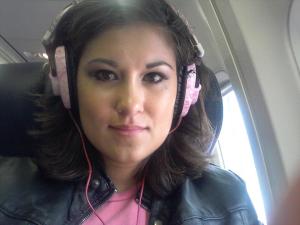 Natasha travels to a tradeshow 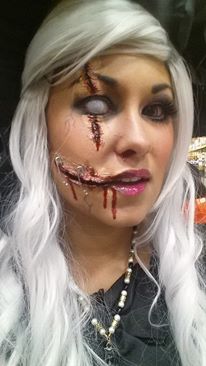 I knew Natasha had recently gotten into Lolita dresses, but I never understood what that meant until very recently.

Lolita is a Japanese street fashion–  an alternative fashion subculture that originated in Japan and is now all over the world. The original Lolita shaped dress is knee length or slightly above the knee and is A-Line, cupcake or bell shaped with petticoats. These dresses are usually worn with OTKS (Over The Knee Socks) or tights. The dresses are extremely modest and the whole Lolita culture is actually based around femininity and modesty.

Since Natasha has always enjoyed playing with really fun make-up, I just thought she’d gotten into playing with fun dresses as well. I didn’t understand that there’s a whole Lolita culture actually based around rebellion. Yes, these cute little dresses are actually a Japanese fashion trend that says ‘screw the way I’m expected to dress. I wear what I want.’ It’s about wearing a pretty dress because you feel like it. Lolita culture doesn’t care what other people think.

Natasha says that sometimes she wears the dresses out to Lolita meetups and on the way people ask her what the special occasion is. Her sweet reply is basically that she felt like wearing a really pretty dress. Because why not? It’s awesome! And she’s awesome!

Lolita fashion says you don’t have to dress to attract anyone. So many times I’ve felt I need to dress the way I feel a man will like…whether I’m single or in a relationship. A lot of my women friends agree- we end up feeling the need to dress for men all the time. With Lolita, you dress to impress yourself. It’s freeing and powerful. One Lolita said:

“We certainly do not do this for the attention of men. Frequently, female sexuality is portrayed in a way that is palatable and accessible to men, and anything outside of that is intimidating. Something so unabashedly female is ultimately kind of scary – in fact, I consider it to be pretty confrontational. Dressing this way takes a certain kind of ownership of one’s own sexuality that wearing expected or regular things just does not.”

Lolita is about having fun and feeling pretty – not for others, but for you.

Lolita is creative and wild and it gives zero fucks. Kind of like the thirties, right? 🙂

So thanks, Natasha, for introducing me to the fascinating world of Lolita. And for being amazing, bold, passionate and just so very YOU!