As a woman, I’ve grown up reading my fair share of women’s magazines. It started with Seventeen Magazine (which I began reading at age 12.)

But I was always a voracious reader even back then, so it didn’t stop there.  I began to devour Cosmopolitan, Glamour, Marie Claire, Elle, Vogue, Allure, and occasionally even Redbook. I couldn’t stop. When I got to college and discovered that the gym existed and was something I could do, I added Shape, Women’s Health, and Self Magazine to my repertoire.

The magazines were “fun” and “silly” but they were also addictive and confusing. I took their advice very seriously because I didn’t have any other information about diet and exercise. I’d never really thought much about working out and being thin before. I grew up in a household that ate dessert and drank soda with every meal, and my mother always cooked wonderful indulgent dinners for us every night.

It took until college for the magazine brainwashing to really kick in, but once I was living on my own, I began to really experiment with diets in order to be the ultimate in skinny. I went through all kinds of weird food phases.

And there were probably many other stupid phases I don’t really remember. And during most of them, I made sure to go to the gym 5-7 days a week as well, because I figured that would help. And I never thought of myself as having any sort of disorder, because it was all “normal”…every woman was obsessed with being thin. Obviously, thin was the best thing to be. And I didn’t have an “eating disorder” because I was neither anorexic nor bulimic. But I was obsessed. I couldn’t think of much else besides what I did or didn’t eat. But of course, I knew I could stop at any time…

So when I read the article 1200 Calories the other day, it almost made me cry, because the comments it makes about problematic marketing to women are so true. Even now. The marketing is just as bad now.

I hope that one day women’s magazines will all stress eating whole foods, building muscle, and getting strong, as opposed to just cutting calories and getting as thin as possible, but I don’t know if this will ever truly happen.

The author of ‘1200 Calories’ talks about how women have been taught from a very young age, through all sorts of media sources, that what we need to do is cut calories and starve ourselves. We’re taught that being as thin as possible is the ultimate perfection. We’re taught that eating low calorie food with no real nutrients and doing as much cardio as possible is the way for us to be sexy.

“Women’s magazine covers frequently use terms like “drop X pounds fast!” and “calorie-torching workout!” and “low-calorie foods.” Men’s magazines use keywords like “build,” “power,” and “strength. Think of all the potential that is thrown out the window when women deprive themselves of food on their quest to be thin. What great things could women accomplish if we weren’t fucking dieting all the time?! It’s saddening.”

How sad is it that the message of going for actual health, building muscle, and being strong wasn’t a message I started thinking about until recently? How much sadder is it that I still barely believe that message to be true?

What can we do about this? How can we combat the harmful marketing to women that’s still going on strong right at this very moment? 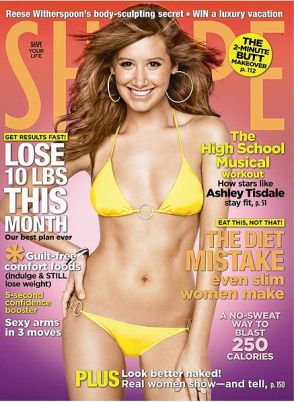