Last weekend, I took a visit to my local Barnes and Noble. My boyfriend (technically, he’s my fiance, but I hate that word, so let’s agree here and now to use it as little as possible) was looking for a new book, and I find wandering the aisles of Barnes and Noble immensely relaxing so I tagged along. As I wandered around, I found myself in the Arts and Crafts section. Lately, I’ve been attracted to the idea of getting more into crafting, mainly because I’m constantly in my own head because my job/studies is all mental. I want to use my hands more. I think it’s a common desire among writers, and I’ve had this conversation with my classmates. In fact, two of my friends at school and I are planning on making soap together soon, so that should be fun. I’ll keep you posted.

Anyhow. So there I am, looking at the books on knitting and scrapbooking thinking about how these aren’t the right crafts for me, when I looked down a shelf and saw books on quilting. Immediately, I felt drawn to the books. It could be because it had been damn COLD that week, and we have a faulty window that won’t shut, so blankets have been top of mind.

Whatever it was,  I no idea why I immediately wanted to google quilting classes in my neighborhood. But later that night I was telling Laura about how I felt drawn to quilting, and how I couldn’t really understand the desire, since I’ve never really given much of a passing thought to this activity. (With the exception of that movie, “How to Make an American Quilt,” which I actually don’t remember anything about except there was a hot dude and old ladies sitting around quilting).

Laura then proceeds to hit the nail on the head. It’s not about the quilting, she tells me. It’s about the women you’re quilting with. And ding! That was it. Quilting is a group activity, at least from what I’ve heard. You sit around with a group of women and you quilt and talk. Not to be corny, but there’s a lot of power in a group of women coming together.

I realized that’s what I was missing in my life. A connected group of women to talk with. I have friends here now, and amazing friends around the country, which I am so immensely thankful for, but I do miss having a solid group of local girlfriends to talk with. There’s something very rich about the group dynamic. I think if you don’t have children, it’s hard to create a solid group of female friends in your 30’s.

If you’re reading this and thinking, “But I totally do!” then count yourself grateful and lucky.

So now the goal is to learn quilting, but also to cultivate relationships and try to bring the women in my life together. 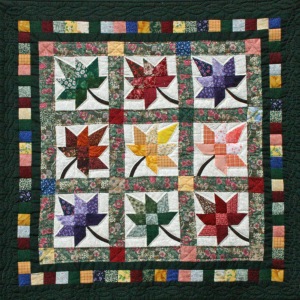