I’ve lost my tolerance for scary movies. When I was a kid, I used to laugh at friends who covered their eyes when zombies popped out of closets. I was fascinated by the psycho clown that lived in the sewer system. Haunted hotels were intriguing to me, as was time traveling pursued by monsters, or ghostly hitchhikers, or possessed televisions and children of the corn.

Sometime slightly after college, I started to have nightmares following a scary movie binge. I became worried about pale dead hands reaching out from under a bed to grab my leg. I checked the bathtub and closet to make sure they were empty before going to sleep. Hotels, places I consider my home almost half the year, started to make me look twice around corners- I thought of bloody twins beckoning from the ends of long hallways: ‘come and play with us.’ 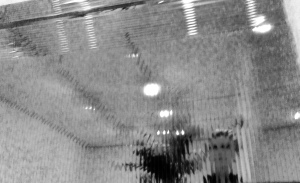 So I stopped watching scary movies. Letting these types of films into my psyche always seems to cause lasting fear (at least for a few days). I’ve been abstaining for years. Even when previews for horror films enter my sight, I attempt to look away, and especially to cover my ears. I’ve found that the sound is actually the scariest part of a movie- not the visual, as you’d expect.

Once I started avoiding those movies, I became less scared in general. I was no longer very worried about dark hallways or creaky hotels or desolate alleyways. I mean, I have a healthy sense of danger avoidance, but thoughts of ghosts, monsters, and serial killers with chainsaws enter my mind much less often. Although I know it’s healthy to face your fears, I think there are times you can avoid them entirely. Yes, scary feelings are to be faced, but scary movies are absolutely avoidable. In fact, I’ve faced my scary feelings by cutting scary movies out of my life. I think that counts.

It’s sometimes hard to know what we should let into our minds and what we should keep out.  Last night, I watched the pilot of a new show, Penny Dreadful, not realizing that it was a horror show. I wasn’t really scared in the moment, so I kept watching. But last night I woke up from a dream about someone cutting out my stomach and watching turtles hatch and crawl out of it. Yeah, I don’t really need dreams like that in my life.