I’ve been reading a few interviews with the female film director Nancy Meyers lately, mainly because her new film, The Intern with Robert DeNiro and Anne Hathaway, has been getting a lot of publicity. She has some very interesting thoughts on being a thirtysomething in today’s world.

If you’ve seen a Nancy Meyers movie (Something’s Gotta Give, It’s Complicated, The Intern, to name a few), chances are you’ve drooled over the lush interiors of her characters’ homes. They’re always so cozy, well-appointed, and warmly lit, that you just want to plop down on one of those beautiful couches with a glass of wine and a thick novel. See below. I mean, WHO wouldn’t want to live in these worlds? 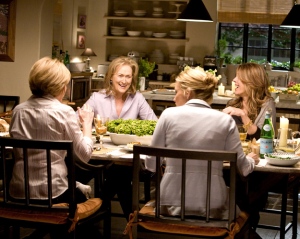 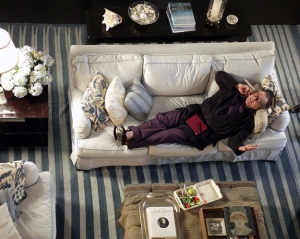 I aspire to get to a point in my financial life where I can live in a home and environment like these when I’m in my 60s. Apparently, there’s a lot of young women in their 20s and 30s who feel the same way. So much so that a group of women recently had a Nancy Meyers themed bachelorette party – complete with turtlenecks, glasses and roast chicken. In a recent NY Magazine article, Meyers talked about that bachelorette party and why she thinks her work resonates with younger women in our generation:

I think it’s because they see a really super-functioning, confident woman who’s made a life for herself, who bought herself this house. And they’re all starting their careers, and I think they must look ahead and say, “Yeah, I like that for my future.” And she’s a divorced woman, but she’s not an unhappy divorced woman. The women in my movies are not seeking romance. It happens when they’re not looking for it.

I really liked that quote, especially that last part. Romance seems to be a by-product of going after and living the life you want. In the article, Meyers also had some interesting thoughts about thirtysomething men in this day and age. She was talking about the difference between Robert DeNiro’s character in The Intern, a 70-somethign year old man who goes back to intern for Anne Hathaway’s company, and millennial men today. She says:

Well, the difference between this man and the millennials. I’ve seen it in my own life. I see guys in their mid-30s with their little boys, and they’re wearing the exact same outfit. They’ll wear like the same T-shirt, same kind of shorts, same sneakers, and I just remember when men didn’t dress like their 4-year-olds.

When my kids were growing up, they had Take Your Daughter to Work Day. It didn’t cross my mind that there was no Take Your Son to Work Day, because it was expected the men will grow up and go to work. I think my generation, brought up by Oprah Winfrey, really got behind girls in a great way, and I think the boys … the line in the movie is “Well, maybe they didn’t get left behind, but you know, there’s definitely some kind of gap.” I’m not talking about all men, of course. But I don’t think the Peter Pan quality is something women want in their men, that’s for sure.

What do you think? I definitely have noticed that a lot of men have that Peter Pan quality. I don’t necessarily think it’s a bad thing, but I do agree with Meyers in that many women don’t want that in their men. I haven’t seen The Intern yet, but I hope to check it out this weekend.

The more interviews I read with Meyers, the more she’s becoming my role model in this industry.